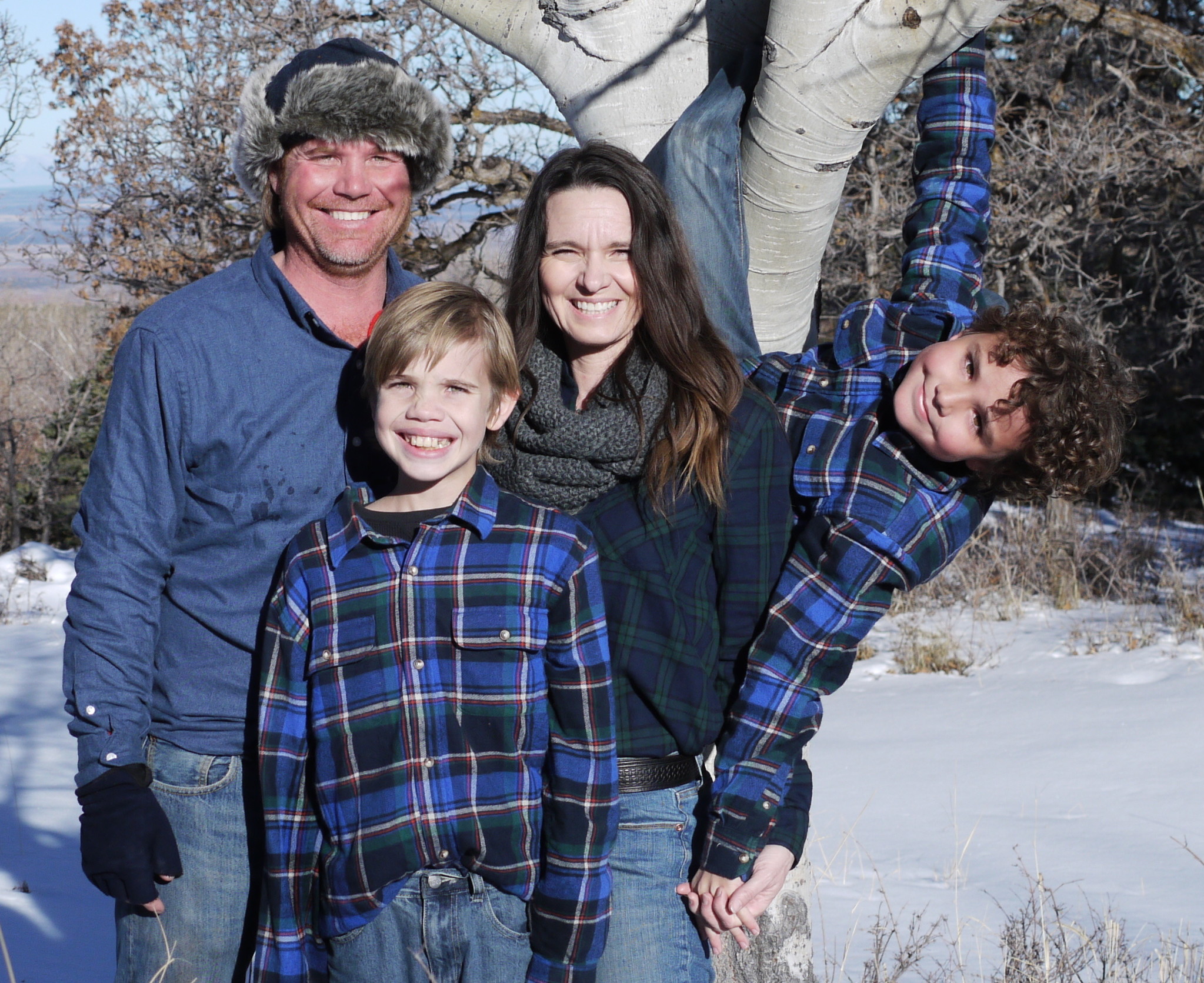 Jackalope Trading Company is more than a store. It’s the evolution of a family, the progression of lives toward a previously unknown future.  The Redds never dreamed they’d own a gift shop.

Adam & Melinda Redd live in the foothills of the Abajo Mountains in Utah with their two sons, Harrison & Sawyer.

Adam’s handmade leather goods reflect years of working with horses and cattle, with a rustic appeal and pleasing textures that enhance their usefulness.

The Jackalope is about history and legacy.

Adam is a cowboy, a rancher with generational ties to southeastern Utah that go back to the pioneers who were called to settle here.  He never wanted to be anything other than a rancher, living out his dream on an historic cattle ranch purchased by his grandfather.

The Jackalope is about dedication and hard work.

Ranch life, especially on a ranch in the desert in the middle of nowhere, is not easy.  Living forty-five minutes from town meant a lot of planning ahead and making do, and while Adam was out cowboying, Melinda was working at making a home.  In the evenings Adam would do leather work, while Melinda made jewelry and started taking photographs.  They brought the internet to the ranch, and Melinda started chronicling their lives and reaching out into the world on her blog.

Although the ranch had been sold years before, Adam and Melinda were assured that one day they would take over its management.  Melinda designed and oversaw a beautiful addition to their ranch house, and the owners of the ranch continued talk of the future in which Adam would run the place.  So Adam and Melinda kept building their lives in the space of fifteen years.

The Jackalope is about creativity and resilience.

Melinda continued to make and sell her jewelry and photography online, in craft fairs and gallery shows, and befriended several other talented local artists.

It came as a shock one day, when Adam received an email that would change their lives forever.  The owners of the ranch had decided to restructure ranch management, and despite years of assurances from the owners of the ranch, the job, the dream, the life that Adam had worked for almost 20 years, was ultimately given to someone else.

The Jackalope is about determination and picking up the pieces.

Often when one has a dream for the future, one is focused on that dream, until it shatters into a million pieces.

Adam and Melinda packed up their boys, their animals, their studio and workshop, their beautiful home, their entire lives, and moved to town.  The heartbroken little cowboys cried themselves to sleep for over a year, as Adam and Melinda struggled to make sense of it all.  Even the dogs were depressed.

A couple years went by, and while Adam looked for a ranch position, Melinda took a job as a bench jeweler.  The more they discussed it, the more they were pulled to opening some kind of business if they were to stay in Monticello.  While it broke their hearts to not have a ranch to call their own, they knew they needed to rebuild their lives for the sake of their boys.

The Jackalope is about transformation and finding meaning.

The people in this little mountain town had embraced, welcomed and supported them, from helping pack up the ranch to bringing meals and simply listening.  Adam and Melinda were invested in the town of Monticello and in their many friends and extended family.

Several ideas were considered.  One issue was that craft and artisan fairs were infrequent, so Melinda and other talented artists had no reliable outlets for their wares.  A store featuring Melinda’s jewelry and photography and Adam’s leather work made sense, in fact it felt a sort of natural progression.  Plans began to take shape.

The Jackalope is about focus and inspiration.

Adam and Melinda chose a building in downtown Monticello, and approached the owners, presenting their vision of what it could be.  They never dreamed the owners would sell, but they did.

Adam and Melinda completely gutted and renovated the building, drawing on their ranching history to design the rustic, western esthetic you see today at Jackalope Trading Company.

Ask Adam about the wood floors, original to the building.  Find out why they took him over a month to strip and refinish.  Talk to Melinda about her inspiration for the support poles in the store.  Each aspect of the store’s design and ambiance has a story.  This truly was a labor of love.

The Jackalope is about collaboration and growth.

By now you may have realized, the Redds are talented folks.  Adam and Melinda can do pretty much anything they set their minds to.  This is where the name “Jackalope” came from, a sort of “Jack-of-all-Trades” spirit combined with an iconic Western lifestyle.

Melinda has a custom workbench right in the front of the store, so you’ll often see her designing and creating gorgeous new jewelry.  In addition to featuring their own artwork, Melinda recruited her artist friends, the best the region has to offer, for a wide variety of quality goods to feature in the shop.  The Jackalope now represents over 30 talented artisans, with either local, regional, or personal ties to the Redds.

Melinda and Adam seek out unique, interesting and beautiful new items to fill out the store’s inventory, and pride themselves on offering items that are hard to find anywhere else.

Jackalope Trading Company is about community and the people we call family.  Stop by often and stay awhile.